A Change'll Do You Good

They say change is as good as a vacation, or at least a change will (sometimes) do you good. I found this to be true when I quit my job last summer, bought a sailboat, and signed up with a new high-tech startup. It's been a gas. It's not just a change of surroundings or a change of workplace or hobby or house that can do you good, though. How about a change of habit? Or how about a change of mind? A change a heart? I think the pure and simple luxury we have as human beings of being able to change our minds is one of the most precious gifts we have. A change of job, or a change of residence... what is that compared to a whole new outlook, a new way of seeing things, new understanding? A change of mind can open new possibilities. It can free us from old ideas that have held is in bondage by our desperate desire to prove that we were right, and give sweet relief in being able to say, "I was wrong" or, "I forgive you."

But we're somehow conditioned to think that changing our minds is a bad thing. Of course, waffling back and forth on issues isn't a good bet - "a double-minded man is unstable in all his ways" and all that - but, by golly, what a load of fun it can be, just to change your mind about something.

When we're little kids, and don't know anything, we sort of drink in the world in wide, wild-eyed wonder until our world-view gets cemented in place somewhere (if we're lucky) in our late twenties or thirties. After that, what are you going to do to find that lost sense of wonder you felt as a kid? Your brain is pretty much full, you've thought about most of the stuff you want to think about, and you've settled your curiosity down with some sort of mental model that makes (more or less) sense of everything.

I suppose having kids of your own opens up a new world, and you can begin to experience and learn new things through them. Some vicariously, some just by observing, a lot just by loving the tarnation out of them. Then they grow up.

But enough about that for now, I want to talk about my friend Marvin, who would not eat chicken unless it was a free range chicken. "What the heck is a free range chicken!" I said. "Well," Marv explained, "they're allowed to run around free and peck at seeds and stuff. They aren't forced to live their entire lives in a tiny cage."

"They like it in a cage," I replied. "Free range, ha! Gobble gobble!" And I made fun of Marvin over free range chickens after that.

Believe it or not, there are some people who think the food that you eat can be happy. Or angry. Or scared... ooh! What's our first reaction to that going to be? Oh come on, don't be silly. Food can't be happy or sad or whatever. I mean, we're humans. We're capable of reason and emotion, not like animals. Emotion is just something in your mind, its because we have a soul, not like... chickens. Cluck, cluck! And anyway, it's dead.

Now, kids have no problem with the idea of food being happy or sad. They have, after all, the Happy Meal, complete with bouncy burgers and cheery french fries. They talk to their food. They sometimes wear it. Frequently throw it. And if the food is sad, they'll let you know it.

What is emotion anyway? According to Dr. Candace Pert, formerly Chief of the Section on Brain Biochemistry of the Clinical Neuroscience Branch of the NIMH, emotion is actually an electro-chemical response. It sweeps through the body from head to toe -- literally from our heads, since the neuro-chemicals (called peptides) are regulated in the hypothalamus. These protein chains create the myriad of emotions we're capable of experiencing. And, these neuro-chemical agents "register" by locking into the cells of our body at particular receptor sites. Cells are sensitive to peptides, and when they replicate, Dr. Pert claims, the new cells tend to have more of the receptors that match the peptides to which the original cell has been exposed. The body actually grows accustomed to particular emotional states, not just because we're in habit of being grumpy or happy, but because the cells of our body become addicted to particular peptide chains. Interesting stuff. 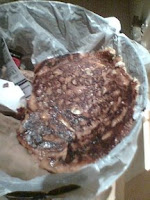 This always happens to me.

I was just in the kitchen making my own Happy Meal (organic brown rice, red pepper and brie omelet with organic free range eggs), put the lid on to let it finish on low heat and then peeked in on the computer. While being hypnotically entertained by Oshiri Kajiri Mushi (apparently the latest and greatest craze to hit Japan in 2007) and the mind-bending Mobius Transformations Revealed, I began to notice a stange, organic burnt smell... my omelet! Crap. My $7.99/dozen free range organic bug infested eggs! My Happy Meal turned into Oscar the Grouch! There he is, glaring out of the garbage can. 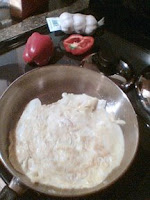 The second time around was much better. I decided not to leave the kitchen until the whole mission was accomplished, a much better strategy. Anyway, the point of it is, I'm not making fun of my friend Marvin anymore. It's nothing much, but I changed my mind, and instead, I'm sitting here eating free-range eggs, from happy little chickens.

Marv long since moved away anyhow.

Now I'm going to have to run, because I just baked a blueberry pie. I like blueberry pie, and don't think I'll change my mind about that! I even remembered to set the oven timer, and it's beeping just like a big ol' happy organic free range hen.
at November 19, 2007