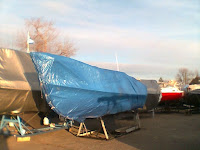 There was a roaring fire in the fireplace when we got to the clubhouse, and dinner was still being served. It hit the spot nicely.
at November 23, 2008