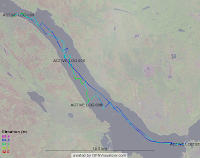 The plan for the weekend was to set sail on Saturday after lunch and try to make it all the way to Baskin's Beach. Thunderstorms conspired to force a change of plans, but by 5:30 in the evening the skies cleared and the trip was on again. Rushing home I grabbed an extra shirt and some rain gear, ran through the grocery store grabbing pre-packaged food and snacks in a more-or-less random fashion, and zipped back to the marina where my friends Liam and Kate were already loading their Aloha 28. Basil the Dog was as excited as ever at the arrival of another crew member, especially one that he knows will slip him small pieces of cheese and bread under the table.

A pizza had been ordered and arrived just as a passing raincloud unleashed a torrential downpour on the marina. I ran back to the boat with the box in hand, and opened it up to find our "Veggie Lovers" pizza was actually a "Meat Lovers" pizza. When I called back Pizza-Pizza they refused to give a full refund. We couldn't wait for a replacement since we were about to cast off. 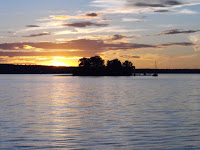 A mild sou'wester carried us close-hauled all the way to Aylmer Island, and as the sun went down we decided to put in at the YMCA campground on the southern shore. Here the water runs deep close to the Ontario border, unlike the shallows that lurk below the expansive waters on the Quebec side. We did only three tacks to our anchorage, one being in the narrows between Alymer Island and the Quebec shore, and hence quite a short starboard tack.

The trees were all a black silhouette against the darkening sky by the time we had the anchor set, so it was hard to tell just how close we were to shore, but the depth sounder read 14 feet. Liam rowed ashore with Basil the Dog in the tender, affectionately named "Mr. Tippy". He was aided by a rechargeable 1000 watt handheld floodlight, quite possibly the brightest flashlight in the known universe. I'm fairly certain this light would be visible from the moon. More than adequate for taking your dog for a walk. 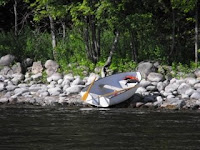 The morning was clear and sunny and after another trip ashore with Basil in Mr. Tippy, we had pancakes. This is also when I discovered that I had soaked my contacts overnight in a glass of vinegar instead of distilled water. I barely started to put in one of the lenses and immediately knew something was wrong and pulled it out. The resulting condition was pickle-eye, and I had to throw the lenses overboard. I spent the rest of the trip looking at everything through a large pair of binoculars that had a wide focal adjustment between the two sides. 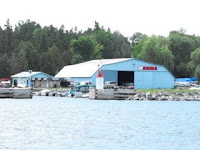 We decided to sail on to Baskins. Again, a good sou'wester carried us upriver easily, though we kept getting headed by wind shifts further from shore and had to throw in a couple of tacks. Along the way we passed Pinhey Point, site of my last overnighter, and the Port of Call Marina. A lot of beautiful houses and some large mansions line the Ontario shoreline. We wondered who these people are. I don't think they are computer programmers. Then again... they might have started out as computer programmers, you never know! 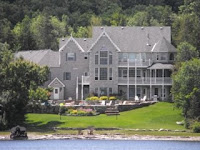 Anchoring at Baskins was a bit tricky since the water was a bit shallower than anticipated. After two or three attempts we managed to set the anchor with about 8 feet of water below. The wind had picked up quite a bit and it was cool enough for a jacket by this point, so I decided to go ashore and tour the BYC camping grounds instead of swimming. After lunch on board we motored off and set sail for a long downwind run. 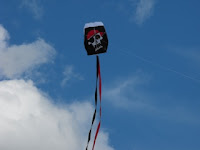 We stayed on a reach most of the way to keep the genoa full. Only once we tried to go wing on wing, but the winds had continued to increase, and a few rollers were coming in from the northwest, causing us to roll. It doesn't usually happen when you're flying a genoa wing-on-wing, and is more likely to happen when reaching under a spinnaker, but an effect that is dreaded by sailors called the death roll was on my mind as the waves caused us to roll leeward to windward. The big genny on the starboard side would fill powerfully as we rolled towards it, amplifying the heeling tendency. On the third roll I eased the sheet to depower the genny, which prevented the oscillation from getting any worse. But these things are hard to control. Sometime the reactions of the crew and helmsman trying to control the boat can actually increase the oscillations and lead to an accidental gybe. I've not done an accidental gybe that I can remember. Most likely I've just been lucky so far. I have been aboard during a couple of accidental gybes, both on my own boat and others, however. We also broached under spinnaker once on my boat. Quite a scary experience; but thankfully the Tanzer is a tough and forgiving boat, and she handled it well. We crew were a little worse for wear. 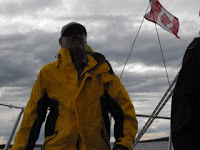 With this in mind I agreed heartily as Laim called to gybe the genny. For the remainder of the sail downwind we fought gusting winds that grew so strong abeam at one point that we feared a knockdown and furled the foresail. Under big pressure, we fought to bring it in, loosed the sheets, and "ragged" the sail. It flogged crazily and shredded part of the leach. Under main only we carried on a beam reach towards harbour. We passed other boats taking shelter in the lee of Aylmer Island, and a few limping back under mainsail towards Nepean. Ahead the skies were black with clouds and rain, but approaching from behind were clear skies, promising the worst was over. Entering the harbour, the calm water and quiet air was a relief. We met a couple of boats heading out for an evening sail, but we were quite happy to be back at the mooring. Half blind, but safe and sound.
at July 13, 2009