Inspired by Martin Bailey's excellent podcast, I went back over all my photos from 2009 and selected ten of my favorites.  It seems like a good way of seeing what kind of progress (or lack thereof) I've made when it comes to taking pictures.
Serenity (January 2009) 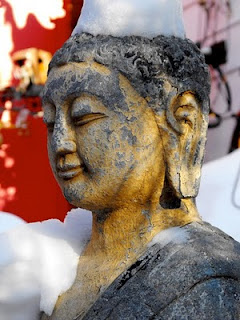 Shot with my Fujifilm S1000fd compact ultra-zoom.  The original was over-exposed but the "enhance" feature in iPhoto did an amazing job in this case.  One limitation of the S1000fd, as with many compact cameras, was the difficulty in getting a nice background blur or "bokeh" effect.  I had to zoom in fairly close to get the effect.  One of my favorite shots with the S1000fd.
Old Couple - Growing Closer Over the Years (March 2009) 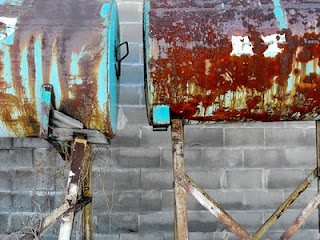 Also on the S1000fd.  Shot on a farm at a Canadian "sugarbush".  I like the composition in this shot, close-cropped to make a sort of abstract view.  I found the farm a difficult location to photograph because there was a lot of clutter, mud and general farmy decrepitude around the place.  The landscape and building shots weren't great, and it made more sense to find interesting objects and focus in on them.
Simply Messing Around in Boats (June 2009) 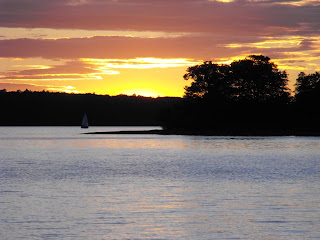 One of the last pictures on the Fujifilm S1000fd before I sold it to upgrade to a digital SLR.  It's hard to resist a nice sunset shot.  It's not the best sunset picture I've taken, but this might be my favorite shot from sailing last summer.  The island is a common sailing destination and makes the scene a bit nostalgic for me, another reason I chose it.  Unfortunately the passing sloop doesn't have her sail illuminated by the setting sun.  That would have been awesome.
Refreshing Ride (October 2009) 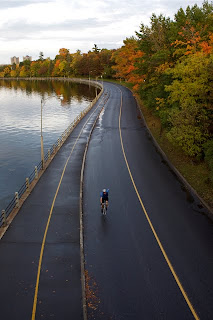 One of a series of shots after upgrading to the Canon EOS T1i, and one of the first pictures with it.  The rider is a little blurry because the shot was unplanned and I hadn't set up the shutter speed for a fast shot.  I still have some learning to do when it comes to quickly dialing in the right shutter and aperture settings.  I like how the rain made the colors on the road stand out.
The End of a Season (October 2009) 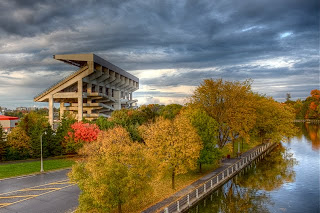 One of the reasons I wanted to upgrade to a DSLR was to experiment with HDR, which seems to be the big thing these days.  I understand it's a fad that can come across being really cheesy, but it was a fun process and I was particularly pleased with the result of this picture, my first HDR image.
City and Colour (October 2009) 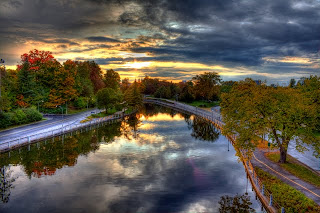 The cheesy HDR shot I was talking about!  Actually I tried to tone back the effect on this scene, but to no avail.  Shooting directly into the sun, I got three images: one almost all black, one with trees in silhouette, and one almost all white.  Only after combining them in Photomatix Pro did all the color appear... it was crazy!  So it was this, or nothing!  And a lot of people have ooh'ed and ah'ed over this shot, so who am I to disagree.  With this image I basically learned what could be done at the extreme end of HDR photography.
The Eardsley Escarpment (October 2009) 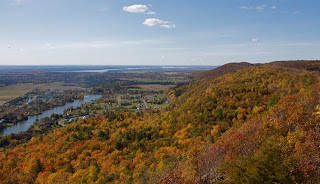 October is a great time to photograph outdoors.  It was a really bright and hazy afternoon so the pictures from this day all looked a bit washed out.  A polarizing filter would have been very helpful here.  I might use this as justification to go out and buy a decent polarizer.
Wakefield Bridge (November 2009) 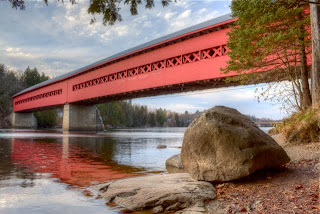 This bridge is such a picturesque spot... unfortunately there's been quite a bit of build-up around it now so there are only a few angles from which you can still get an unspoiled shot, and most of those are on private property.  I found this spot on the river bank, popular for swimming in the summer, where the rural character still cam through.  It was overcast and lighting was difficult.  I resorted to auto-exposure bracketing and HDR for this image.  I like the composition, but not 100 percent satisfied with the post-processing.  Also, I was hand-holding the camera for the three exposures... braced with my back against a boulder.  With a tripod, it would have been sharper.  I already have a tripod, so training myself to use it will be one of my goals for 2010.
Classic Modern (December 2009) 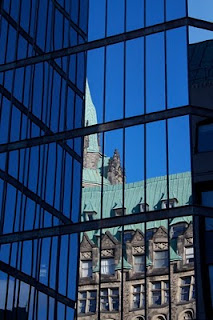 This was taken on a cold day with a clear blue sky.  This scene in downtown Ottawa gets photographed a lot, but I'd never noticed it before.  I took several shots here, but chose this one because the lines match up pretty closely with the golden rectangle proportions I've written about before.  The image isn't as sharp as I wish it was, but that might be because the focus was on the steel beams and not on the reflected stonework.  A smaller aperture (and a tripod!) would have helped.
Head-Smashed-In Buffalo Jump (December 2009) 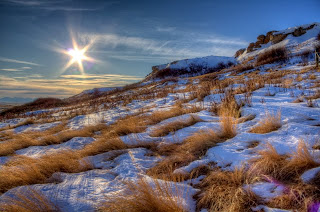 One of the last shots of the year - another HDR image, shot right into the sun, three exposures, hand held.  What I like about this shot is the way the rays of light radiate from the sun and spread across the ground in patches of light and shadows over the snow and dry grass.  It's also a great name for a place.  Humorist Dave Barry wrote that when he first read about it, he couldn't believe it was real, so he called up the visitors center.  When they answered "Head-smashed-in, can I help you?" he said it was probably the highlight of his entire life.
All images © 2009-2010 Darren DeRidder
at February 14, 2010