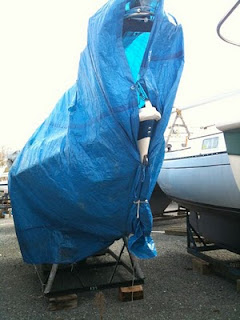 April arrived with some unseasonably warm weather, giving sailors no excuse not to get cracking on boat preparation.  No doubt the keeners already have a fresh coat of bottom paint and are busy polishing their brightwork.  Not to be left out, I hauled my new rudder out of the shed, spent about 20 minutes looking at it, and called it a day.  You've got to ease into it, then build momentum.

Last weekend Aura came out from her winter cover.  Looks like she kept pretty well. Through the winter.  Packed in behind literally hundreds of other boats, the wind didn't get up quite so brutally as it did at the BYC.

Yes, so Aura is over at Nepean Sailing Club now.  I've got to say, it's a relief to be over there.  Initially I was on a waiting list but last week the mooring assignments came in, and I'm happy to report that I've got a slip. Aura will be sailing out of NSC this season.

NSC has really nice facilities - not the old world charm of BYC, but a modern, nautical, fresh kind of look that I think captures the essence of the sailing / cruising lifestyle.  It's always well maintained and has activities going year round.  There are a lot of racers and Tanzer owners, so this it the place to be if you race a Tanzer.  In addition its only about 10 minutes from work, making it a lot easier to make it to the weeknight races.

I took a few pictures of the boat while I was down there. 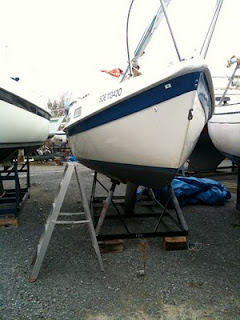 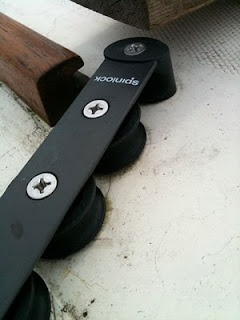 I installed new deck organizers last summer.  They rock.  My deck is a little dirty though... time for some StarBrite deck cleaner! 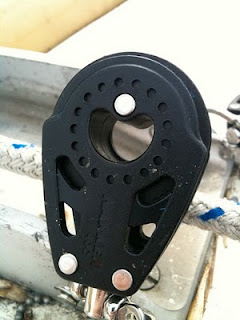 One of the new swivel blocks I installed for the spinnaker uphaul and downhaul.  Wish I had gotten these the first time around.  I put the other blocks on the gunwhales for the spinnaker sheets but they don't ratchet or swivel. 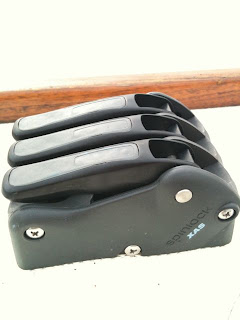 The pièce de résistance!  The Spinlock XAS triple rope clutch.  This thing cost more than my bicycle!  It's nice though.  It makes us go faster.  In my imagination.
at April 12, 2010

The XAS clutches are really great, totally secure with easy of release.
Andre