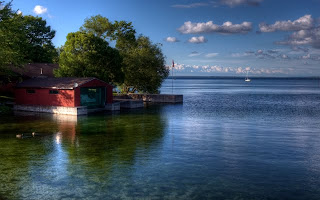 © 2010 Darren DeRidder
Driving to Gananoque on a Friday evening, we arrived somewhat tired at the Trident Yacht Club well after dinner time.  The next hour or so was spent provisioning and settling in, and I retired early to the quarterberth.
The morning dawned bright and clear and passed with a leisurely pancake breakfast aboard thanks to our skipper and his two fancy compact nonstick skillets.  Then we set to work installing a new refrigeration unit. What followed for the next 4 hours could be described as furkelling. Furkelling is a time honored tradition amongst backpackers, sailors and other quirky folk.  In the middle of the night, when you are trying to sleep in a hostel, someone inevitably gets up and starts furkelling around in their backpack trying to find stuff that they don't need but can't remember what they did with it.  They can't sleep until they remember what they did with their sunscreen, so they furkel around in the bowels of their pack until they find it.  Then they put it right back where they found it, get back into bed, and within seconds are snoring loudly while you remain awake and disgruntled by the commotion.
Furkelling often takes place in the dark, or in cramped quarters, and is usually a solitary activity that demands someone's undivided attention, and produces no tangible results except possibly to annoy other people.  After some time, we were satisfied that our furkelling with the refrigeration unit was getting nowhere, so I poked my nose outside and announced it was perfect weather for sailing.
Promptly we stopped furkelling, assembled our scattered crew, and sailed out around the east end of Howe Island, across the 40 acres, and into Brakey Bay.  The evening was warm and grand, and we enjoyed a walk ashore with the dog, but after sundown the wind began to rise and the boat began to roll.  We started watching a video, but I got cramped and uncomfortable and said I needed to sleep, which obligated everyone else to clear the cabin.  The rolling motion of the boat was starting to get to me; only lying down flat and closing my eyes brought relief.

Around three in the morning I was awakened by skipper who announced we were now a lot closer to shore than before.  Could we be dragging our anchor?  The wind had shifted around from the North and we were now fully exposed to big waves piling into the bay.  If our anchor failed, we could be driven up on the rocks.  The GPS had been set with an anchor alarm and showed that we had swung in a circle, but it seemed our anchor was still well set.  We had at least 100 feet of anchor rode out.  For the remainder of the night I didn't sleep at all, and the boat lunged and rolled as the waves continued to beat us.  The rigging clanged up in the spreaders, the wind howled through the cowlings, the rain blew in through the gangway and wave after wave after wave jolted us.  On the VHF radio I tuned into the weather channel which brought warnings of storms and high winds from Kingston to Cornwall.
Morning came grey and cold, and I was the first to bolt for the hatch and collapse over the pushpit railing to feed the fishes.  Four times I heaved over the transom, and in between I sat with the wind and rain in my face, staring at the horizon and trying to gain equilibrium, or laying down flat in the quarterberth, eyes closed and dead to the world.  I became hypothermic and couldn't stop shivering.
Finally, at around 3:30pm, the strong wind warning ended, the whitecaps came fewer and farther between, and two of the crew set off to shore in the dinghy to take the dog for a walk.  This dangerous maneuver fortunately did not result in the calamity I had predicted, so with all aboard once again we weighed anchor and motor-sailed into the teeth of the wind, heading straight back to TYC.  The skipper was apologetic.  He hadn't anticipated such an ordeal.  Never mind, I said, I'm just glad to be getting out of that hell hole.
The sun came out just as we arrived back at the dock, and the evening turned clear with a gentle breeze.  Perfect weather for sailing.
at June 16, 2010