In his wonderful and comprehensive book, "Japanese Homes and Their Surroundings", first published in 1885 and now available from Google Books, Edward S. Morse writes the following delightful description of Japanese home-building craftsmanship.

Within these houses there are often to be seen marvels of exquisite carving, and the perfection of cabinet work; and surprise follows surprise, as one becomes more fully acquainted with the interior finish of these curious and remarkable dwellings.

... as to altering the present plan of housebuilding... If such changes are effected, then will perish many of the best features of true Japanese art, which has been the surprise and admiration of Western nations, and of which in the past they have been the unwitting cause of modification and degradation it has already undergone.

A somewhat extended experience with the common everyday carpenter at home leads me to say, without fear of contradiction, that in matters pertaining to their craft the Japanese carpenters are superior to American. Not only do they show their superiority in their work, but in their versatile ability in making new things. It is a notorious fact that most of the carpenters in our smaller towns and villages are utterly incompetent to carry out any special demand made upon them, outside the building of the conventional two-storied house and ordinary roof. They stand bewildered in the presence of a window-projection or cornice outside the prescribed ruts with which they and their fathers were familiar. Indeed, in most cases their fathers were not carpenters, nor will their children be; and herein alone the Japanese carpenter has an immense advantage over the American, for his trade, as well as other trades, have been perpetuated through generations of families. The little children have been brought up amidst the odor of fragrant shavings, -- have with childish hands performed the duties of an adjustable vice or clamp; and with the same tools which when children they have handed to their fathers, they have in later days earned their daily rice.

When I see one of our carpenters' ponderous tool-chests, made of polished woods, inlaid with brass decorations, and filled to repletion with several hundred dollars' worth of highly polished and elaborate machine-made implements, and contemplate the work done with them, -- with everything binding that should go loose, and everything rattling that should be tight, and much work that has to be done twice over, with an indication everywhere of a poverty of ideas, -- and then recall the Japanese carpenter with his ridiculously lights and flimsy tool-box containing a meager assortment of rude and primitive tools, -- considering the carpentry of the two people, I am forced to the conviction that civilization and modern appliances count as nothing unless accompanied with a moiety of brains and some little taste and wit.

It is a very serious fact that now-a-days no one in our country is acquiring faithfully the carpenter's trade. Much of this lamentable condition of things is no doubt due to the fact that machine-work has supplanted the hand-work of former times. Doors, blinds, sashes, mouldings are now turned out by the cord and mile, and all done in such greedy haste, and with the greenest of lumber, that if it does not tumble to pieces in transportation it is sure to do so very soon after entering into the house-structure. Nevertheless, the miserable truth yet remains that any man who has nailed up a few boxes, or stood in front of a circular saw for a few months, feels competent to exercise all the duties of that most honorable craft, -- the building of a house. 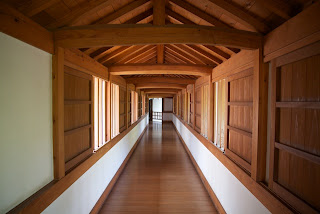