When I started thinking about my top music picks for 2011, I had a hard time thinking of any one album that had really took the prize.  Instead an odd collection of material surfaced: a couple of web videos of studio footage, online music clips from a film composer, a few of one-off tracks, plus a couple of albums that had been on the shelf long enough to qualify as "rediscoveries".  It turns out there were also a bunch of new additions that got a lot of airplay last year. I've singled out a few of the favorites here and listed the rest in point form, and at the end included links to some of those music and video clips. Check them out!

This particular album has long been near the very top of my list of all time favorites, but it sat on the shelf long enough that when I took it out for a spin, it was a very nice rediscovery. It holds such a high position on my list of favorites that it definitely deserves a mention.  Maria Joao is a very gifted and unusual vocalist from Portugal. She's able to do amazing things with her voice, and isn't afraid to experiment. Her long-time collaborator Mario Laginha's performance on the piano is technically dazzling, and Trilok Gurtu amazing percussion work rounds out the album to create something that is really hard to classify, a mix of avant-garde, world music and European jazz . For a while, I had the opening track set to play as my morning wake-up alarm. The hushed sounds of an early-morning city scape and the soft, slumbering opening chords accompany an almost hymn-like vocal melody that slowly rises, flitters and then soars like a bird into a new day. This is an album that not everyone can appreciate, but those who do are likely to cherish it.

The French jazz composer and pianist Daniel Goyone may not be well known in North America, but those whose musical tastes extend to European jazz have probably heard of him. Like other European artists, Daniel Goyone has taken the Great American Art Form and combined it with local influences to create something unique and highly sophisticated. His evocative compositions meander between plaintive and sanguine, floating somewhere between major and minor, never seeming to settle. The unique combination of instruments, including bandeon, violin, marimba, oboe, and the aforementioned Trilok Gurtu on percussion, create something that's again hard to classify but sits somewhere between jazz, chamber music and traditional French folk music.  There are a few albums by Daniel Goyone that I've tried to get hold of; unfortunately they are very hard to find. 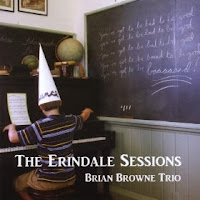 My biggest musical influence is undoubtedly the great Canadian jazz pianist Brian Browne. I first saw Brian playing at the Ottawa International Jazz Festival in 1999, and later was fortunate enough to study piano with him.  A couple of years ago, Brian told me of an old acquaintance who had discovered a collection of master tapes from a series of concerts that the Brian Browne Trio gave at the Erindale Secondary School library.  A teacher there by the name of Marvin Munshaw, who happened to be a huge jazz fan, brought the trio to the school and recorded them on a reel-to-reel deck. After some extensive remastering, the result is "The Erindale Sessions", featuring the original Brian Browne Trio as they sounded in the late 70's.

I mentioned this album last year before it was commercially available. It now is available, on iTunes and also direct from brianbrowne.com by mail order.  My favorite tracks are probably "Blues for the UFOs", "Stompin' at the Savoy", and "St. Thomas", but the whole album is a treasure. 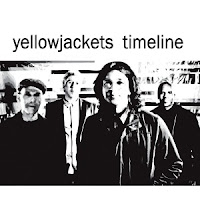 The Yellowjackets are my favorite band of all time. For many Yellowjackets fans, the return of William Kennedy must have seemed too good to be true.  Although Peter Erskine and Markus Baylor both did some fantastic drum work over the years since he left the band, William Kennedy's unique, polyrythmic style was a big part of the sound that people came to identify with the 'Jackets.  And he doesn't disappoint on this album, which marks the band's 30th anniversary.

The opening track "Why Is It" features all the rythmic and melodic intensity you'd expect from the Yellowjackets, but the overall tone of the album more reflective, characterized by several richly crafted ballads, especially the title track "Timeline", the lush ballad "A Single Step", and the lyrical closing song "I Do".  Beautiful work from an exceptional band, who after 30 years is still producing some of the finest electro-acoustic jazz ever.

The piano music of Peter Martin was an exciting Youtube discovery, with his great 3-minute jazz piano clips.  His short-play album "Set of Five" features five solo piano pieces that are all excellent, range from hard-bop to ballads, and wrap up with an amazing jazz cover of Coldplay's Viva la Vida.

Peter Martin's playing is technically brilliant, easy to listen to, and steeped in the best jazz piano traditions with a flair for originality and innovative arrangements. Definitely recommended.  The album is available for download on iTunes. Check out Peter Martin's web site http://petermartinmusic.com for more on this talented pianist.

Bernie Senensky is another great Canadian jazz pianist. He has recorded quite a few albums, but it wasn't until my musical mentor Brian Browne played a few tracks from this CD for me that I got switched on to his music.  The interpretations of standards on this album are creative and technically impressive. Top notch jazz piano trio music.

Other albums that were favorites of 2011 include the following, all of which are highly recommended!
And to finish off, here are links to those video and audio clips I mentioned: David Norland, who composed the instrumental soundtrack for "Anvil: The Story of Anvil", and the legendary Lyle Mays performing on MIDI-fied piano and Spectrasonics software synthesizers with Alex Acuna on drums.

David Norland - Instrumentals from the Soundtrack to "Anvil: The Story of Anvil"
It seems a little strange that a film about a heavy metal band from Toronto could feature such nice background music. Somehow it worked, and contrasted beautifully with the over-the-top metal tunes Anvil is known for. The movie is actually a hilarious and moving documentary about a band that never quite made it to the big time, but refused to give up. David Norland's scoring for the film lent it a very human touch. Especially the tune "Shibuya", which you can hear in the Audio section, which is played in the film's closing scene, really captured the feeling of the story.

Lyle Mays album "Solo Improvisations for Extended Piano" was mentioned above. It's excellent, but here you can actually watch him performing live on a MIDIfied grand piano and synth, together with Alex Acuna, in HD video and high-quality audio.