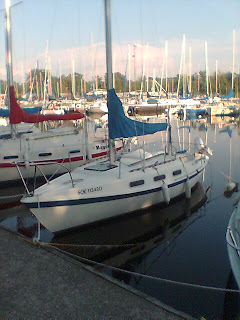 Here are a few pictures of Aura. The harbor at BYC has 'Mediterranean' style moorings rather than finger docks. I admit the finger docks at Nepean Sailing Club are really nice. On the other hand, you can put many more boats in the harbor without all the docks. It makes boarding a bit challenging, so I think I'll construct a gangplank of sorts.

This first picture is Aura laying at Britannia Yacht Club. There are a lot of Tanzer 22's at the club, but I think she's one of the nicer looking ones. For a boat that was built in 1979 it's in surprisingly good condition. 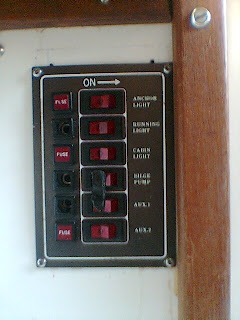 The first major project undertaken on Aura was sorting out the electrical system. Although the depth meter was working, almost nothing else was: AM/FM radio, VHF radio, anchor light, running lights or cabin lights. I started by recharging the two 12volt gel batteries and then got first mate Markus in with his soldering iron. Markus set to work on the fuse panel and after some creative soldering we had everything wired and working. In fixing the electrical, we dislodged the depth meter's solenoid, so I bought some Marine Gloozit for sticking it back on the inside of the hull. 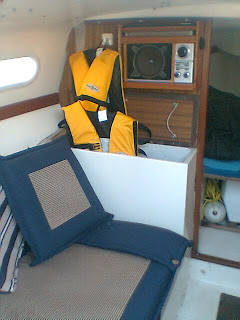 The last picture is just a shot of the inside of the cabin showing the am/fm radio, wet locker, and part of the quarter berth that can transform into a small table for two. Definitely cozy in there. A part of the v-berth can also be seen, and the porta-potty stuck underneath. I haven't overnighted on this boat yet, but I expect it to be basically a floating camping trip.

As for sailing, I've been out on Aura quite a lot, starting with some easy day-sails with friends and picnics off Aylmer island, up to a PHRF Jib-and-Main (JAM) race last Thursday. The plan is to race Tuesdays and Thursdays from now through fall, so I'm working on getting a couple race crews together. It's a great boat to sail and the fun factor is way high! I really like this boat.