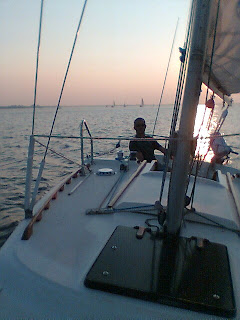 No better way to learn a new boat that to race her, I guess. We've been racing Aura for a couple of weeks now. The first trip out was to take a look at the course and try not to hit anybody. A bonus was that we met up with Dwight, skipper of Gabrielle, and his crew out on Lac Duschenes, and gave him a proper rock-star salute. This is a picture of Markus sailing back to harbor after the race.

PHRF is a handicapping system that allows boats of different makes and models to race together, and the faster boats have a "handicap" that causes them to "owe time" to the slower boats... they get a few seconds shaved off their score and when the results are tabulated, its not necessarily the first boat across the line who wins, but the boat with the fastest time after adjusting for the PHRF rating.

Last Tuesday we sailed out and no wind was blowing. We found about six Tanzer 22's all roped up together, however, and decided to pull alongside and raft up. Everyone was sitting around in the late afternoon sun, drinking and having a party, hopping from one boat to the next. One of the fellows came over and gave us some pointers on rigging up the boat to go faster. I took one suggestion and raised the boom gooseneck about six inches to get the sail higher in the air.

On Thursday we had a really good race. We were not the first to cross the line but we were to windward of the other boats and tacked early to beat for the windward mark. All was going great until we came upon the mark and found that we weren't high enough to round it. We went immediately onto a port tack and unfortunately forced the boat behind us to tack as well. Apparently, in that situation you're supposed to jibe and go around the mark again. On the downwind leg, Markus did a perfect spinnaker launch and we sailed well, passing a Shark (slightly smaller sailboat) that seemed to be standing still. As the wind died down more and more, the horn signaled a shortened course, and we limped around the leeward mark for one last tack in the light air. As we came to the finish line we beat out a couple of other, larger boats, much to our surpise. 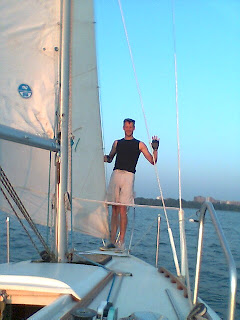 Tonight we raced PHRF JAM (Jib and Main). No spinnaker. Most of the boats were flying full genoas, but we put up a #1 jib. Initially it was plenty enough sail as the winds were high, but as the race played out, the wind settled right down and left us badly under powered compared to the other boats. We might have opted to change sails mid-race, perhaps on the downwind leg, but we didn't. Anyway, we got a reasonable start, sailed well, made the lay-lines to the marks, and finished the race in the middle of a beautiful sunset and one last puff of warm summer breeze. Can't complain about that!
at July 26, 2007