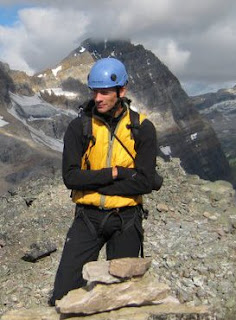 It is time for an update. I've been away in the Canadian Rockies, spending a week at Lake O'Hara to do mountaineering. In the end, we didn't get to the top of anything other than Mt. Schaffer (in the picture). The weather wasn't great, and the night we spent at the Abbot Pass hut between Mts. Victoria and Lefroy left about two feet of fresh powder snow all over everything; climbing Victoria was out of the question. Ironically it was a lack of snow on Mt. Huber that put us off. Having been on Huber a few times, I decided not to go the last few pitches to the summit. My partners Markus and Marcel attempted it, but found the last section impassable. At least I felt my judgement was confirmed.

Since the climbing trip, Aura has gone out a few times. Unfortunately, one of those times we tore the Genoa. It's now in need of a major repair. I've purchased sail thread, needles, and a leather sail-makers palm (so you don't stab yourself). I'm working up the courage to attempt the repair. My knowledge of sewing is quite limited. Okay, its zero.

Also in the repair department, whilst flying the spinnaker with Jimmy last Tuesday, we went onto a beam reach, swung the pole ahead, and somehow broke the hook on the end of the spinnaker guy. I have no idea how this is possible, but it broke clean off at the swivel, so the sheet is in need of a new hook and what looks like some tricky rope lashing technique to reattach it all. I thought I'd be writing here about major improvements to my boat, but so far it's all been minor upkeep... it's a lot of work! Fortunately, it's also a lot of fun!
at August 27, 2007

I like that picture :-). Good commentary too, interesting--wish I'd found it sooner! ndr