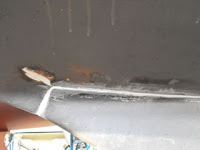 Interprotect 2000 and Sikaflex 291 polyurethane caulking have been applied. 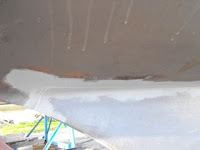 A final layer of Interprotect. I had thought of leaving the polyurethane expsed, since the Interprotect is more brittle, but I painted over the joint after all, to provide a base for the antifouling. 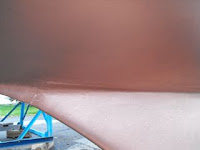 VC-17m antifouling always looks great after it has been freshly applied. 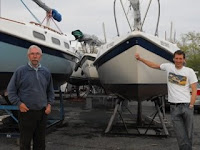 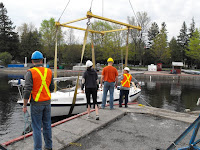 Aura splashes! Cranes and crews had all boats in the water by mid-day.
The first thing a skipper looks for when his yacht splashes in the spring is any water coming into the bilge or around the through-hulls and keel bolts. One of my crew had been working on the knotmeter. Within minutes of launch, water was slowly collecting in the bilge and we were able to trace it to the knotmeter thru-hull fitting. I'm happy that it was discovered immediately rather than springing unexpectedly while nobody was around to manage the problem. As I discussed my problem with John, an old salt and fellow T22 owner, a wry smile spread across his lips as he realized I'd probably be laid up for the start of the racing season. "Well," he said with a prim British lilt, "you're f***ed!", and cackled gleefully.

At the other end of the system, the instrument gauge itself, which had also been opened, filled with rainwater, so repairing it is out of the question. A knotmeter is a valuable piece of equipment for a good racing crew, so I would like to replace it. The through-hull may be replaced with a temporary dummy plug for the time being. There is now a new rule on my boat, however: don't unscrew anything without supervision of the skipper!

Aura back on the hard to repair a thru-hull fitting. 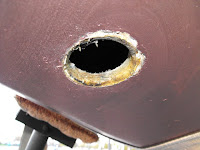 After some hours the fitting is removed. The right tool for the job couldn't be found at first. Finally I discovered an oil filter wrench at Home Depot. It's three narrow grips are designed for large-diameter threaded fittings like shower-heads, etc. The inside lock-nut came away with some delicate yet firm negotiation. Note the thickness of the fiberglass lay-up; the toughness of Tanzers is legendary.
at May 10, 2009