The other big project I undertook this spring was to refurbish and reseal the portlights. This turned out to be a really big job. Had I known what a big job it would be I'd have tried to get it done over the winter instead of waiting till two weeks before launch.

Initially I wanted to remove all the aluminum frames, clean them, replace the plexiglass, and reseat them with new sealant. The first frame proved incredibly hard to remove. Even using a putty knife and hammer to cut around the flange, it didn't want to come out, so I gave up on that idea and just removed the plexiglass.

When the boat came out for knotmeter replacement, I found that four of the frames were installed with white butyl and came out very easily. Of course, they'd been leaking like crazy; white butyl isn't a good solution for portlights. They were also extremely gunked up. Two of the frames were very hard to remove and I ended up resorting to brute force with a putty knife and hammer to cut through the caulking under the edge of the frame. Finally they came out, no damage to the frames thankfully but the fibreglass was a bit worse for wear. I epoxied the small gouges I'd created; they're hidden by the frames when the portlights are installed anyway. 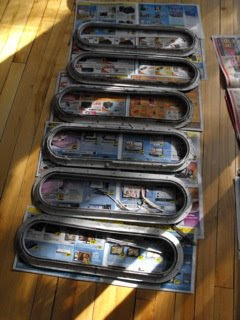 Cleaning up the frames took a couple of days. The white butyl cleaned off easily with Varsol, but the silicon / polyurethane caulking took hours of scrubbing. I used Marine Debonder and GooGone with a scrubbing pad and a razor blade. The thing that worked best was GooGone, a green scrub pad, and lots and lots of elbow grease. GooGone smells like oranges, too, a lot better than Marine Debonder. 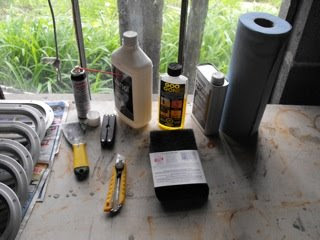 This is something you want to wear eye protection for. I managed to get a speck of solvent-soaked gunk in my eye and took a sprint across the boatyard to wash out my burning eyeball under a faucet. All of this stuff is poisonous, toxic and caustic.

I went to the plastics store and asked about cutting new portlights. It was going to be 20 bucks a piece but the guy said the old ones looked like they'd clean up with some polish. He sold me a bottle of Novus number 2 fine scratch remover and it works like magic. With a little more elbow grease the lenses polished right up, almost like new. This polish is great. It will remove oxidation and scale that's acumulated on plastic, buff out the fine scraches, and give you a shiny clean new surface. I'm going to use it on my car headlight covers next. Incidentally I tried toothpaste and it didn't work. 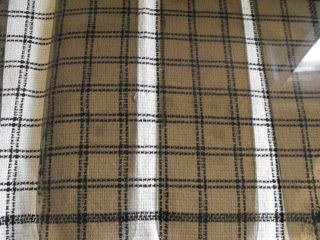 The sponge went in first, and for good measure I put a bead of BoatSeal around the outside edge of the sponge. The lenses went in next and sealed up against the sponge and caulking. The idea is to seal the lense to the metal frame with caulking rather than relying purely on the sponge to make it watertight. There were also small gaps at the weld-points that I filled with caulking.

Next the rubber spline goes in. I had to trim a little divot to squeeze it in at the weld joints but in general it went in easily. Tanzer Boat Parts sent enough spline and sponge to do all the ports with several inches left oer. It ain't cheap though. 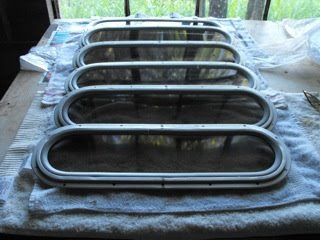 There was some delamination from the plywood core around a couple of the port lights. I epoxied the worst of it. I might have covered all the exposed wood with epoxy if there'd been time, but only did the areas that looked like they'd seen some water. In theory these should not be getting wet anyway; if they are you have other problems that need to e dealt with. 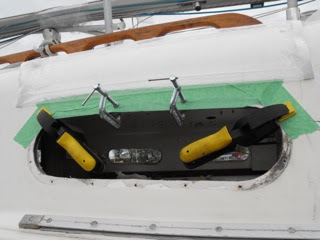 I filled the small seam at the ends of the spline with BoatSeal and installed the portlights with Sikaflex 291 and the original half-inch number six stanley head screws. They look pretty good.
at May 26, 2009