Today I became a member of the Brittania Yacht Club. It is the oldest yacht club in Canada. This is where Aura will be moored for the summer.

The boat is "on the hard" at Nepean Sailing Club. I'll launch her there and sail her down to Brittania. The cradle she sits on will have to be dismantled and hauled over to the BYC yard by truck.

I like the Brittania club. It has a reputation for being a bit elitist, but I found them to be very friendly and helpful, interested in new members. Thanks to Mark Walton at BYC. If all goes well, I'll keep Aura at the BYC. It's close enough to reach by a pleasant bicycle ride along the canal and river-front pathways.
at May 30, 2007 No comments: 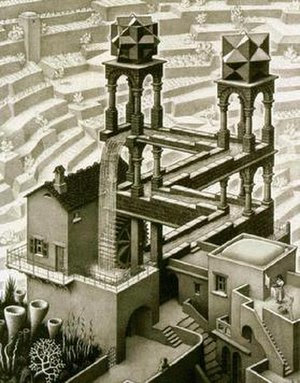 In the book Gödel, Escher, Bach: a metaphorical fugue on minds and machines in the spirit of Lewis Carrol, author Douglas Hofstadter refers to great works of logic, art and music as three aspects of a central essence, different expressions flowing from a common source.

It strikes me as interesting that lot of the great hackers are also fairly accomplished musicians, to one degree or another. Quite a few of the engineers I know and respect happen to be quite musically talented. It may not be mere coincidence, either.

Of course there are plenty of good programmers out there who never took up a musical instrument. However, I've begun to see the musician/hackers and the pure technicians differently.

The technician is the person who is fascinated with technology. They actually like complicated things, and figuring out what makes them work. They get a sense of accomplishment from having mastered a particularly difficult piece of software, much like solving a puzzle. They've probably built several computers from spare parts and are constantly upgrading their various electronic gadgets with the latest technology.

On the other hand, Musician/hackers are fascinated with creating things, and see technology as a way to express themselves. They're less likely to be captivated by the latest high-performance video card or Java SDK. Whatever allows them to get to work immediately creating things, and gives them the greatest range of artistic license, is what they like. They don't want to make things that are complex, they want to make things that are elegant.

Technology irks me most of the time, because it tends to be artless. A collection of functionality that is no greater than the sum of its parts. Musician / hackers don't just want to build programs that do things, they want to build programs that do things beautifully. I realized this when I began to notice the similarities between composing music and writing computer programs.

There are cases when the artist is needed. Chances are, the undergrad who just created the latest most-popular web application software is one of these. Unfortunately, there is a downside. Artists, particularly musicians, are hard to get along with. They especially don't get along well with other musicians. This is because they want control over what they see as the creative process. Suppose someone had gone up to Leonardo da Vinci when he was painting the Mona Lisa, and said, "You got the smile crooked!" Or if someone had insisted Bach write his Brandenburg concertos featuring the bagpipes. Can you imagine? Such is the indignation of the musician / hacker when told he must conform to such-and-such a dictum.

Artists work best when there aren't so many people telling them how to create their artwork. As a result, they're more likely to enjoy working alone or in a small group, but they might also be more likely to create something elegant.
at May 16, 2007 No comments:

I recently made a decision to leave the company where I have been employed for the last 6 years, Bridgewater Systems Corporation, and become a contractor (gasp!) working with a very small group of high-tech entrepreneurs to form a new start-up. Starting a new company can be rather risky, and the golden age of startups in the Ottawa Valley may have passed, but its the sort of opportunity you don't get every day. There are a lot of reasons why I decided to do this, and as I was reading Hackers and Painters by Paul Graham, I began to feel even more like this is the right decision.

Graham gives an example of a galley ship, powered by 1000 rowers. He says there are a couple of factors limiting the speed of the ship. One is that the individual rower isn't going to see any noticeable improvement from working harder. The other is that, on a boat of 1000 rowers, the average rower is likely to be... well, an average rower. If you took 10 rowers and put them in a dinghy, their performance might double, because they'd be able to see the effects of rowing harder. And instead of taking 10 average rowers, if you took 10 of the best rowers, their performance might be 5 times better than average. The problem is when you can't see measurable results from your efforts.

The other thing Graham says is that you need leverage, which means the decisions you make will impact the success or failure of your endeavor. One way to tell if you have leverage is if making the wrong decision could result in a catastrophic failure.

These two things, measurability and leverage, are what Paul Graham says you need to contribute significantly to the wealth of society. And starting or working for a startup is how you get them.
at May 15, 2007 No comments:

Email ThisBlogThis!Share to TwitterShare to FacebookShare to Pinterest
Labels: business 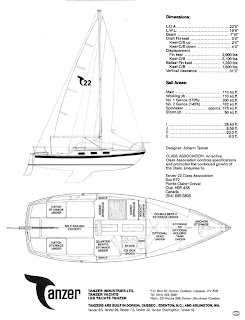 Last Thursday I went down to the Nepean Sailing Club to look at a boat. A fellow drove up and hollered through the passenger window "Do you want to buy a boat?" -- the owner of the Tanzer 22 I was about to see. The boat was high and dry in the yard and we spent about an hour poking around. Her name is "Aura" and she was built in 1979.

The bottom paint is blistered and peeling and theres a crumbly seam between the keel and the hull that needs to be faired up. The gel-coat is gouged along the gunwales and crazed around some of the fittings, but the teak has been all nicely refinished topside. There was a little water in the bilge and hints of rust from the keel bolts, but it looked treatable. The electrical system is a bit of a dogs breakfast, but there are only running lights and a radio to re-wire. There are four sails that look in good shape, including an older spinnaker, and a 9hp Mercury 4-stroke outboard motor.

All in all a nice boat, and Ottawa has one of the biggest T22 fleets anywhere. The community is very active with lots of racing opportunities and people to share information with.

So I made an offer that took into account the amount of work I figured was needed and... long story short, I'm buying my first sailboat this week.
at May 14, 2007 1 comment: