Just in time for Christmas! The Story of Stuff with Annie Leonard is a marvelous little animated piece that puts consumerism in perspective. The 20-minute movie can be viewed online at storyofstuff.com. Everyone should see this vid... Check it out, and tell your friends!
at December 12, 2007 No comments:

With all the news lately of the RIAA's McCarthyistic dragnet on file-sharing music fans, it seems some of the record companies have had a change of heart. The big four record labels are allowing imeem.com to stream their full catalogs of music online, supported by online advertising[1].

Since the recent conviction of Jammie Thomas, a 30 year old single mom, who was sued by the RIAA for $222,000 for 24 songs ($9250 per song!)[2] there's been a strong backlash against the RIAA. Example: websites like freejammie.com and boycott-riaa.com. One of the best sites, RIAAradar.com let's you search for music to find whether its RIAA-free or not.

The ongoing RIAA vindictiveness goes hand-in-hand with copyright concerns, but there's more than meets the eye when it comes to copyright protection. Newer ultra-restrictive terms not only infringe on the rights of users[3] but seem to hurt sales, as well. Retail giant Walmart recently demanded major record labels release their product in the MP3 format, free of Digital Rights Management (DRM) technology[4], demonstrating how attempts by the record industry to protect their profits have backfired. A recent attempt to bring in a "Canadian DMCA" sparked a massive negative reaction from Canadians[5].

While the record companies continue to enjoy large profit margins, artists themselves are getting fed up with being starved out. They've formed the Recording Artists Coalition to fight the industry's claim that their songs are "works made for hire", effectively removing copyright interests from the artists and transferring those rights directly to the record labels[6]. And recently, Radiohead decided to make its latest album available as an online download under a pay-what-you-want-to scheme. And while there were plenty of folks who downloaded the album for free, the band still made out pretty well by all accounts. It's estimated the band got $8 on average for each sale. The average cut a recording artist would receive from a record label? About $1.30.

With online radio stations having been largely run out of business by recent copyright rulings that charge 10,000 times the going rate for online song broadcasts [7], some, like Whole Wheat Radio have turned to broadcasting only independent music.

Having gotten tired of mainstream music and the industry's deplorable treatment of artists and consumers a long time ago, I've been into independent and foreign artists for a while, and have found there's an incredible amount of fantastic music put out by relatively unknown artists... you just have to look a little harder for it. Now sites like RIAAradar and WholeWheatRadio are making it easier.

Maybe the recording industry finally figured out people hate them and are angry enough to stop buying their stuff. Maybe they've finally clued in, and maybe imeem.com is the result.
at December 12, 2007 No comments:

Battling for Opinion on Climate Change

The US House Committee on Oversight and Government Reform has issued a report describing a systematic effort by the White House to manipulate climate change science[1]. The report is available in PDF format from the House of Representatives here[2]. From the document:

This report presents the findings of the Committee’s investigation. The evidence before the Committee leads to one inescapable conclusion: the Bush Administration has engaged in a systematic effort to manipulate climate change science and mislead policymakers and the public about the dangers of global warming.

I am sure that most North Americans are very unaware of the lengths to which industry will go to influence the thinking of consumers. Last month I wrote a post titled "Meatitarianism" in which I talked about John Robbins' book Diet for a New America, which documents the ongoing battle between medical scientists and the meat and dairy industry. It's no wonder that there's confusion about what a healthy diet is. The book lists example after example of the deceptive tactics used by the meat and dairy industries to influence public opinion.

The battle for our opinions is just as extreme in the oil and energy sectors. The many people who today believe that the "science is still out" on climate change have fallen directly into the American Petroleum Institute's stated goal that "Victory will be achieved when ... average citizens ‘understand’ uncertainties in climate science ... [and] recognition of uncertainties becomes part of the ‘conventional wisdom.’"

I've been meaning for some time to write more on the climate change issue, and in particular about the sources of resistance and skepticism. This is just one more lead out of dozens of sources, but it was good enough to post.
at December 10, 2007 No comments: 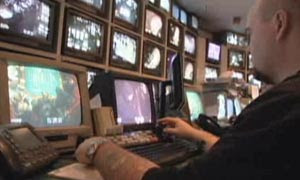 PBS Frontline has made available online their program "Spying on the Home Front" [link]. As a computer systems engineer working in the telecommunications area, I can attest to some of the content in this piece, as some of my work has been in related areas. This is one reason why many young people, and many "technically savvy" folks have become more and more concerned with personal privacy and freedom. From what I've seen, the pervasiveness of digital surveillance goes further than this report would indicate, and that there are significant drivers from both state and private sectors for "pimping out privacy", to coin a phrase.

Take for example the RIAA and MPAA. Recently, a toolkit designed to help universities spy on their students for copyright infringement made news[1]. Eventually, it was forced offline[2]. But these could be the more innocuous examples.

The Frontline piece discusses the NSA, and the "illegal" wiretapping act, and the report is factual and not overstated, in my opinion.

In the near future, I hope to write an article, or series of articles, that provide a brief overview of personal privacy issues in the digital age. There are just so many aspects of it, and "everything is connected", as they say, that's its hard to know where to start! But there are already many good resources available to the inquiring mind:

I hope you'll take an interest, perhaps watch the program, and maybe even follow up by familiarizing yourself with the Electronic Freedom Foundation (EFF) and Electronic Privacy Information Center (EPIC), where many privacy-related concerns are covered. This is something that increasingly affects all of us.
at December 04, 2007 No comments:

If, as a thinking individual, if it is possible that you could tire from watching the television, and the inkling of learning something about the real world should come along, here is part of a documentary about the Hmong people in Laos who are the victims of an attempted genocide.

The first video isn't too graphic, but the subsequent videos require a login because of scenes of mutilation. The media doesn't seem to be reporting on this, but it is important to raise awareness.

You can also read about the CIA's secret war in Laos, which precipitated this atrocity, on Wikipedia.
at December 02, 2007 No comments: