Canada puts US on Torture Watchlist

CTV News has reported that the Canada has named the United States on a watch-list of countries with "greater risks of torture". The list is part of a workshop for Canadian diplomats meant to teach them to recognize signs of torture and places where it is more likely to be found. It specifically mentions "U.S. interrogation techniques" including "forced nudity, isolation and sleep deprivation". Presumably the document was compiled before the use of waterboarding in American interrogations became widely publicized (waterboarding has been declared illegal by the United States in the past and is an internationally recognized form of torture[1]).

Siting the list, a lawyer for a Canadian boy who has been illegally held and tortured at the infamous U.S Guantanamo Bay prison for five years claims that he should be returned to Canada for a court hearing. The lawyer said that the boy has been abused, that his rights have been violated under international law, and that Canada is not doing enough to help him.

And the lawyer making these incriminating statements is a Lieutenant Commander in the US military.

"We Own the World"

To follow the previous post, Noam Chomsky has written a new article, "We Own the World". It is excellent.

He explains clearly the intellectual and moral malaise that permeates current discussion of US policy towards Iran and the world in general.

Photo by John Soares, linked from www.chomsky.info
at January 14, 2008 No comments:

Noam Chomsky is a professor of linguistics and philosophy at the Massachusetts Institute of Technology. He has lectured and written extensively on US foreign policy and social issues. I've always been very interested in his perspectives, but until I saw this video, I'd found his other lectures somewhat dry. This interview does a good job of presenting an informed critique of the current political climate in the US regarding Iran in a concise and articulate manner. Noam Chomsky is a very respected voice, and what he says on Iran in this video is well worth hearing.

My first thought was, what an odd place to meet John Baird. The Green Door is basically packed on any night of the week with tree-hugging, veggie chomping, earth-loving activists. And Baird is most recently credited with playing a major role in removing any meaningful targets from the Bali climate change initiative. Against tradition, he barred opposition MPs from participating in the summit, and then even as reports of Canada's dismal environmental performance surfaced, he stood with the US and Japan in blockading the Bali agreement.

I said, "You know, I have to say I was pretty disappointed with Canada's showing at the Bali climate change summit."

So I told him, from the reports I'd read, it seemed Canada played a major role in watering down many of the milestones that were meant to be included in the proposal.

He replied, "We can't keep doing the same things we've been doing for the last 60 years because they don't work," and stated that you can't have regulations that don't include some of the biggest emissions countries out there.

At this point John seemed a little annoyed, but guarded by a well-practiced veneer of professional courtesy. His reply didn't make a whole lot of sense to me: "If China has enough money to build up a huge military and throw journalists in jail, they have enough money to do something about the environment!" He reiterated that what we've been doing for the last 60 years wasn't going to work, and that carbon emissions were worse now than ever. I told him I was well aware of that. Nevertheless, I said, the comments from the New Guinea delegate resonated with many people.

"If for some reason you are not willing to lead, leave it to the rest of us. Please get out of the way."


After dinner, as I headed uptown for a coffee, I wondered why his parting remark didn't make much sense to me. China... lots of money... journalists... jail. What do any of those things have to do with Canadian environmental policy? How can we ignore the moral hypocrisy of pointing fingers at China while Canada effectively hobbles the effort to give real traction to the latest international environmental initiative? I decided his statement didn't make sense simply because it's not logical. He was probably in a rush, trying to grab a quick bite to eat, not in the mood to get questioned. But I had hoped for something a bit more tenable.

It would have been neat to find out more about John Baird's thinking on the environment and Canada's direction on environmental issues, his reasons for hamstringing Bali, and why his vague proposals for a yet-to-be-determined alternative are so much better... but he had taken his veggie plate to go, and made a beeline for the door.

"Keep up the good work," I said, with as much "veneer" as I could muster. 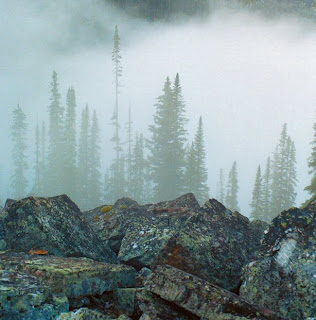