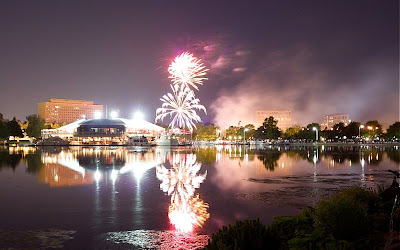 I think a political rant is long overdue, so I'd like to comment on a remark by Matthew Mendelsohn, directory of the Mowat Centre for Policy Innovation at the University of Toronto.  I'm sure the Mowat Centre has put forward some very good work, and Mr. Mendelsohn has some thoughtful insights that you can read about elsewhere, and I already confess to taking his remark out of context.  But it's a line I hear repeated ad nauseam and frankly it doesn't wash.

I know these things are complicated, and that lots of factors are involved, but the above statement totally ignores perhaps the most obvious variable in the equation, a variable that is paramount in private enterprise, but which seems to be almost non-existent in most parts of our government.  That variable is efficiency, and the government isn't very good at it.

Since moving to Ottawa, I've formed numerous friendships with great people who work in the federal government, and I've lost track of the times I've sat dumbfounded listening to stories of bureaucratic incompetence, waste and inefficiency on a huge scale.  Millions and millions wasted... the familiar sort of cavalier way in which these stories are tossed off, with an air of mixed incredulity, resignation, ambivalence and - dare I say - a hint of smugness.

Yeah, assuming efficiency is a constant (say, near zero), you really don't have much room for improvement towards a balanced budget, continued services, and limited taxation.  But all of those are proportional to efficiency, and if we had systems of accountability in place to measure, monitor and maintain efficiency in our government, it would go a huge distance towards improving all those other simultaneous expectations.

So, no, these aren't conflicting expectations.  They're quite reasonable, if you also consider that one of the expectations of the "general public" is that the government will operate on some scale of efficiency that is at least within an order of magnitude of the private sector's.

So why don't we have that kind of accountability?  I think basically because nobody in government wants it (witness the current mad scramble to cover up unaccounted-for MP expenses).  Measures of, and accountability for, efficiency might cut into perks, expense accounts, and the idea that one friend of mine puts this way... "See, I don't have a job, I have a position.  I really don't have to do anything, I just have to fill the position."

I can't blame him, really... many people would be delighted with such a position.  But it only exists as a result of a lack of accountability and measurability of efficiency.  I'd be very interested to know if there has been any actual work or research into practical systems of efficiency measurement and accountability for diverse operational objectives... I suspect it has been done, primarily in the study of business processes for private enterprises.  Applying some of that science in government policy... now that would be a welcome innovation.
at May 25, 2010 No comments:

Spring Colours on the Canal 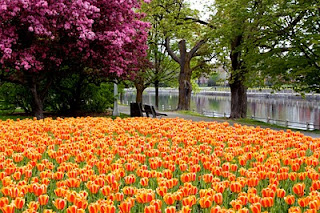 Last year I inherited a "new" rudder for my T22 sailboat.  Unlike the original swept-back rudder, which was designed more for aesthetics than handling, the new rudder is straight and moves the turning moment much closer to the axis of the tiller.  Instead of two hands on the tiller pulling hard in a stiff breeze, you can sail along with a finger.
The original owner of this rudder had a sneaking suspicion that it was waterlogged and a lot heaver than it ought to be.  Two years of sitting in a shed, it was dry for sure, but there were a number of hairline cracks around the edges that had me worried. 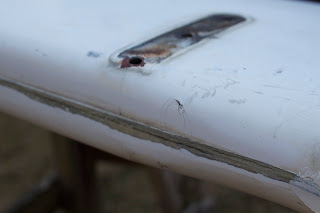 I decided to refinish it, seal up any visible cracks, patch the gelcoat as much as possible, and paint the submersed areas with epoxy paint.  First I sanded off the old anti-fouling paint, using an orbital sander and of course a double respirator, as the paint dust is toxic. 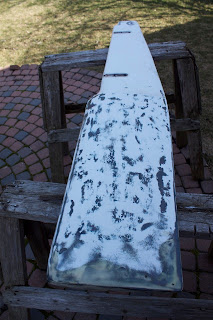 With most of the old antifouling off I applied some gelcoat patches to the most dubious areas. These would have to be sanded flush afterwards. 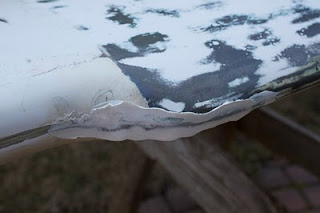 Once the gelcoat patches were sanded smooth I went over the whole rudder with Captain Tolley's Creeping Crack Cure, letting the liquid seep into every tiny crack and crevice I could find on the surface of the rudder and especially around the edges where the two halves of the mold were joined together.

When the liquid stops seeping into the cracks, old Captain Tolley has done his job.  Next I painted below the waterline with several coats of Interprotect 2000 epoxy barrier paint. 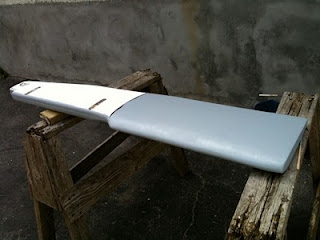 Things are starting to look better now.  About six hours after the last coat of Interprotect 2000, I scored some leftover VC-17 from a friend and painted on the anti-fouling.  Nice an bright copper color, but it turns black within a couple of weeks once it's under water. 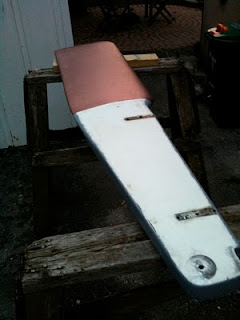 Turning my attention to the more visible part of the rudder I applied four coats of Brightside white deck paint to the top.  I polished the pintles and purchased new 3" bolts and nuts to mount them.  The new rudder is a little bit thicker than the old rudder so the old bolts wouldn't go all the way through.  The new bolts were a bit too long, though, so I cut off the ends with a dremel.  Broke about half a dozen disks in the process, but that's to be expected.  Of course I wore goggles to keep flying chunks of cutting wheel from hitting me in the eyes. 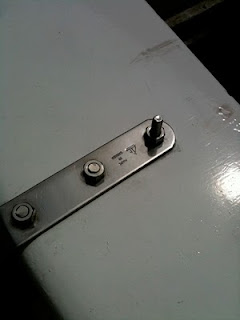 You can see the old rudder (curved, on the left) and the new rudder (straight, on the right). 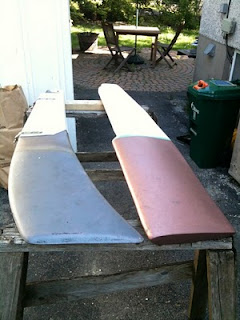 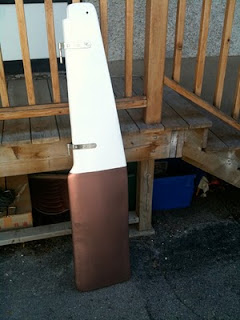 The rudder is ready to be mounted on the transom.  Here you can see the gudgeons and pintles, and the rudder after it's installed. 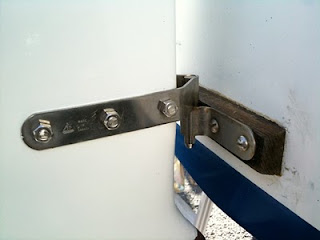 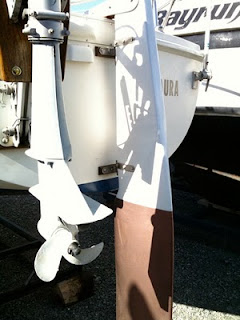 Finally the boat is ready to go in the water.  Aura looks good in her new mooring. 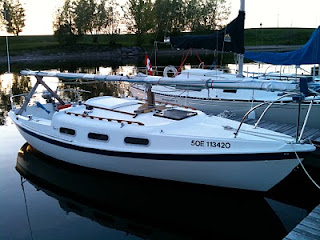